You are here: Home / Lemons to Lemonade / Chemo Injected – Start Your Engines! 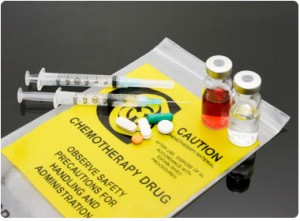 The anticipation is by far the worst part; waiting for weeks after surgery, and wondering what it’ll feel like as Chemo goes into my veins is like a science fiction movie! Can we see it through our skin? Will it feel like oil being pushed forward like a tsunami moves torrential waters? It’s amazing what one woman and her imagination can do.

Finally! I went and had both Chemo sessions done. It felt like nothing. Tuesday it was through my vein in my arm, and they added a Benadryl cocktail ahead of time, so I was basically in “la-la land!” I slept through most of it, and woke up feeling exactly the opposite of what I’d feared, … refreshed! Very strange…  Wednesday I had the chemo injected into the port in my abdomen, and again I felt nothing as it spread and conquered what it was supposed to kill. Wouldn’t you think for a minute, that if something has entered your body to kill off little cells of cancer that you’d at least feel some sort of animosity traveling through your system? It’s easy to see that I’m on overdrive for sure. Overthinking, over expecting, maybe even over doing. It just seemed that the busier I kept the less I would think about it!

It’s been a day since the treatments, and I’ve gone to the health food store and bought all kinds of vegetables, that I wouldn’t normally have eaten, and with every bite I picture throwing it all up. All that expensive food just landing in the toilet. Am I a drama queen, or what!  I’ve bought everything I can think of that is filled with protein only to be told by the nutritionist that too much protein can cause kidney stones. Is there a “win” anywhere? Geeze … I thought I was a healthy eater before I was diagnosed, and now I feel like I hadn’t even touched the surface! Kale, Shitake mushrooms, okra… it’s like learning a foreign language!

My daughter is on her way here from Raleigh, NC in anticipation of spending the worst days with me. She and I tend to butt heads often, mainly because we’re so much alike. She knows that day 4 and 5 are supposed to be a nightmare. The only thing the two of us feel that is worse than throwing up, is watching someone ELSE  throwing up! She gets it from me; all we have to do is hear someone gag and we fall apart. I told her, “by the time you go home, we’ll have to decide which we hate more: each other or Chemo!”

I’m waiting for her to show up in a cab, and I’m waiting to start throwing up! I’m hoping I don’t throw up on her when she walks through the door. I’m feeling a bit crazy from the whole situation, can you tell?

I’ll let you know in the next blog what came first, her arrival, me throwing up, or her throwing up because of me. Will she get right back in the cab after realizing she couldn’t do it?

I don’t know if I could’ve done it?

I guess she loves me!