How many things can happen to make you miss your flight?

This is gonna’ be a tough one to describe!

Over the last week, my girls have each had 3 friends come in from NY to stay.  We’ve only been living here in the Carolina’s for a MONTH- but their friends missed them, and of course NONE of them could think to take the same flight??  So there I was making individual runs to the airport THERE and BACK- like I NEEDED MORE tumult in my life. 🙂  I just closed the front door behind the movers, for God’s sake, and here I am, the only driver in the household along with 6 kids.  Did I mention I’m working on the air too??  It’s just been total chaos!

The last kid, the last trip to the airport… I timed it perfectly.  I came downstairs, yelled out to her, “Are you ready?”  I hear a scream from 4 girls!

This is IT.  I’m approaching “denial stage.”  I walk into the kitchen, watching them scream, looking towards the floor… and then I see it! They spilled an entire bowl of pancake batter on the kitchen floor.  THAT- wasn’t the part that was aggravating!  The fact that ALL girls were COVERED in batter, was what knocked me for a loop! Even the AIRPORT GIRL was covered!

Just when I thought I was about to lose it from being impatient and tired, ready to scream… I looked down between all of their legs and saw him!  Our black lab was sitting there- looking up at me, while the girls were screaming, and he was COVERED in Batter!

My mouth was open! Nothing was coming out! I saw the plane fly away, minus the kid… I felt like I was choking…and then?  I sat down at the table, and BURST out laughing! LOLOL!  If you could have seen the scene… you would have too! OMG.  No… OM GAWD!

I threw myself into survival mode, and started barking orders through my laughter- “All of you! OUTSIDE! Take the DOGS! (yes, the white dog was covered too, but you couldn’t see it on him) HOSE them DOWN! Don’t come back inside till I tell you it’s SAFE!”

They all ran out, dogs chasing them…it was straight out of a sitcom… 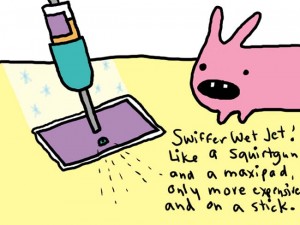 for my LIFE, just trying to clean up in a hurry and trying to still get this kid to the airport!  I went through 3 Swiffer pads, threw down towels on the floor, told them all to come back in…it was like ‘before and after!’  They were all stunningly clean!  Even the dogs!  Same with the floor!  The whole time I was thinking, “this should be a commercial for the Swiffer product!”  Of COURSE I was thinking this… always branding…

PS. Got to the airport with this child that hadn’t shut up for a week, only to find out that, when with me by herself, I couldn’t PAY her to say TWO WORDS… can we say, “AWKWARD?”  We got to the airport with plenty of time, and found out that her plane was an hour delayed!  I tried like the dickens to get her to have a conversation, but to no avail!  Took her to eat, …bought time that way, gave her my phone to play with…and then? …she was in ROW ONE!

They wouldn’t let her ON till everyone else boarded.  No matter how many times I asked,…”but she’s a MINOR, traveling on her OWN??”…they wouldn’t let me put her on the plane till the end.

NOW you know, why I’m EXHAUSTED. That’s just ONE piece of my exhauting puzzle!

I still love her.  She’s just Shy, when the kids aren’t around, and everything else came out Clean!  See? That glass is half full, all the time- in ‘Robinville.’

Previous Post: « I have survived living in a Cul-de-sac!
Next Post: A Dogs Purpose, by W. Bruce Cameron »