The National Association of Broadcasters -NAB- started out with a BANG!

You are here: Home / Robin Marshall / The National Association of Broadcasters -NAB- started out with a BANG!

I booked my room online, and it looked beautifully ‘official!’  It was called “The District!” How ‘politically correct’ is that?  In fact, it’s probably the first time in my life that I WAS!

I had no mishaps in the air, or ‘On the air’ prior to the trip,… arrived at Dulles, grabbed the Blue Shuttle, arrived at the hotel in plenty of time for the events ahead, and was feeling mighty proud of myself that I’d let Nothing get in the way of my plans.

I had one bag, Heavy as Hell, because I had my newly released ‘best selling’ books in it, that I’d planned on giving out to selected friends that I was looking so forward to seeing!  The desk clerk welcomed me graciously, and asked for my credit card which I handed over with no misgivings at all.  He said, “You’ll be staying in room 312,” handed me my key… and THAT’S when it happened!

I said, “Where’s the elevator?” (WHY do I have so many ELEVATOR stories???)  He said, “There IS no elevator,” and pointed to the carpeted purple stairs.  I was in shock, of course- you may as well have asked me to pump my own GAS!  I said, “WHY NOT?”  He said, “it’s out of order.”

I knew right then and there, that I’d made a HUGE mistake in booking this hotel, but he smiled and once again nodded towards the ‘Purple Steps to Oz.’  I told him there was No Way I could carry THAT bag up THOSE steps, (I felt the NY coming out in me)…so he got his ‘worker’ named Michael to carry it up the three flights for me. 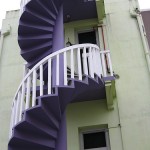 We got to the room, the sweat was pouring off poor Michael’s forehead, and I swiped my key, opened the door, and almost died on the spot!

The room was as big as my front porch at home! ARE YOU KIDDING ME?  I looked around quickly, because I didn’t want to relinquish my new friend Michael, and noticed that not only was the room as big as a friggin’ Postage Stamp- the bed just barely fit, the drawers did not OPEN and there was NO CLOSET!  I was amazed that there was even a bathroom!  I told Michael, “Don’t go Anywhere- there is NO WAY I’m staying here!”

So poor Michael dragged my suitcase back down three flights of steps to the front desk, where I began my rant and rave.  The clerk SMILED at me the whole time, nodding his head… while in MY head, I’m thinking, “WTF??”  He said to me, “would you like to cancel this reservation? I have plenty of people that need the room, because there is not One room available in the entire city of DC, and it will go at a Premium!”  If ‘looks could Kill’ at that moment- he’d be dead on the spot.  I then turned to Michael and said, “I’ll be staying, after all.”  This man must have lost 10lbs from the time I got there to the time I got settled, and yes, I tipped him well- in spite of his workplace.

For the next two days, I slept there in between the NAB events, which I’ll fill you in on next- but I did NOT let the maid service in my room, for fear they’d trip over my home made closet! I also feared every night, that there’d be bed bugs, and don’t for ONE SECOND think I didn’t examine that bathroom for holes in the ceilings and walls, where CAMERAS might be lurking!  Call me paranoid, but it was the Perfect Set Up for this scenario.  I’m STILL looking on the web to make sure I don’t show up in a peep show!

Hotel aside, I saw so many friends and had such a wonderful time! I didn’t bother explaining the hotel situation to too many, because I knew I couldn’t do it justice, although One friend, suggested I stay with HIM, ‘ platonically’ of course, with that “Gleem Sparkle” in his eye, and another friend offered the same deal, but I believe he Meant it with no strings attached.  Problem was, by the end of the night, I was so damned TIRED, that I couldn’t even THINK about ‘chit chatting’ with someone in the same room!  If either TRIED something with me- I’d be sleeping the whole time through it anyway, so what kind of enjoyment would they have?!  As a result, I decided that My Room was Worth every penny that I’d spent!  See how easily I can rationalize?

I had dinner with my friend Dennis, and his whole crew… dinner with Joel and an intimate group in Chinatown… I met Glenn who couldn’t get over the fact that I honestly looked like my picture- of course my response was, “who did you THINK I’d look like??”  I really didn’t GET that one,… I had drinks with a group of men that own and operate stations in Hawaii, I met up with men I’d worked with a year ago, that I’d thought had fallen off the face of the earth- only to be pleasantly surprised that they’re still in biz, and there might be an interest in working together again!  I met a girl, Stephanie, I’d seen at the Conclave a year ago, that was just cute and smart as a button, …

I was approached by a guy that had come up to me two years prior to ask me if I remembered him, because back then he’d asked me if I was a ‘runner’ because I had ‘runner’s legs!’  Funny thing was, I DID remember him, due to the oddness of the conversation, and he told me, that this time around he spotted me across the room, because- once again HE’S a runner, and recognizes OTHER runners legs!  How funny!!! Unfortunately, two times I burst his bubble, telling him, “No, I’m a Walker, not a Runner.”  Hey! It doesn’t matter how you get there, right? It just matters what the results are from the effort! 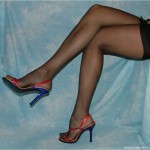 I went up to a guy that had a Huge booth for Dance music, with the intent of finding out who he uses for Voice Imaging,… Who knew, maybe he could have used a strong female voice?

I introduced myself, asked him that question, and he said, “Robin, I use YOU!”  You can only imagine my expression- “Huh?” Then he explained: “about a year ago, I wrote you, telling you I ‘mentor’ kids in college about radio.”  Well- I do the same thing, and then he had asked if I’d mind contributing voice parts for this particular radio station’s imaging.  I always say “yes,” when mentoring is involved, …so, who knew??  At the party that night, He and his crew were the hosts, and My Voice was one of those on their format! Hahaha!

I saw my other buddy Joel, met up with my friend Nikki, who was one of the writers in my book, but I’d never met her before, was thrilled to see Mike who still dresses better than me,  and found out that my former GM at CD101.9 now works with Mike, as does Holland that owns a house on Block Island, that once again extended the courtesy for me to come and take a load off, and what I’d give for that opportunity…Rachel and Rocco– one with sore feet, the other just happy to be doing great business.

I found out while there, that my PD had been let go, at the Link.  He brought me in less than 3 months ago, so I called him and said, “You helped me– so let me help You! Get on a plane and come on down here today!!! I have a lot of friends here- as I’m sure You do toooo!”

I felt awful about that.  Most important thing to remember, is that most people will call in the first week, when you’re let go from a company,…but in Three weeks- you’re no longer on the radar, and people tend to forget to make sure you’re ok.

Just keep it in mind, so that your friends that are going through it, won’t be left behind.  Mark it on your calendar, to call your unemployed friend in THREE weeks! It makes a difference!

Finally, I met a guy who gave me a card that read, “I’m somewhat of a bullshitter myself,… but occassionally I like to listen to a real pro.  Please carry on.”  I liked that!

Since being home, I’ve contacted all who impressed me, and have meetings set up for each.  I guess maybe I impressed them too!  That’s a wonderful feeling, for the ‘artist’ in me, as well as the ‘business woman’ in me.  It’s hard, because at times being Both, it feels like a bit of ‘competition’  within MYSELF!  I know you know, and normally it all works out in the end!

It literally took me 5 days to recouperate from this trip! I swear it’s the truth! High Heels, when you’re not used to them, will knock the SHIT out of your body- being “On” all the time is exhausting -battling an iPhone with a battery that’s shot- feeling guilty for not being able to reach my kids- sleeping in that God forsaken hotel- and trying to make things happen like I’d Hoped, is so, so tiring… but all’s well that end’s well, and it DID end well!

The Last thing to happen: I’m on board the plane, half up, half asleep, and I hear the flight attendent say, on speaker, “Ladies and Gentlemen, we’re approaching the Charlotte International Airport, and are preparing to land.” I jumped in my seat, truly felt like I was having a Heart Attack, because I expected to hear, in my stupor, “LaGuardia Airport!”  I’d forgotten in my semi-concious state, that I’d just recently moved, and would be landing in Charlotte! Ugh! Those few seconds scared the SHIT outta’ me!

I made it home safe and sound, and when I walked in the front door,… it really did feel like Home. Being here 3 months,… I guess it’s all a frame of mind. My family’s here, so here is Home.