So, I met this guy

How special an art can be, and how late in life it can develope.

You are here: Home / Robin Marshall / So, I met this guy

and as Alanis Morriset would say, “isn’t it Ironic that I also met his beautiful wife…?”

The fact is, he’s 76 years old, and probably the most artistic man I’ve ever known.

He came into his talent without even knowing he HAD the talent, and he’s attached to tubes while telling his tale… his wife is his biggest fan, -next to me- but I let her think she’s still his biggest fan, because they’ve known each other just a bit longer than I’ve known them,… 54 years more.  He is a man worth telling about, so please allow me to introduce him to you.

Meet Aurelio Hernandez and his wife Maria.  Can you imagine: in the middle of my “Best Selling Book,” week … instead of following up with Public Relations, and sending out “Hey! Thanks for buying my Book,” releases,…         I got in my car, with the GPS that only works in certain parts of the Carolinas, to take the time, and of course, to get lost, just to meet this man who had won over my heart, because of the way he paints spoons. 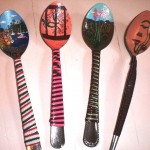 It’s the truth.  I saw his beautifully painted spoons at a flea market a few weeks back.  Let me just say this:  I have a creative and artistic mind, and it takes a LOT to stop me in my tracks, because …well- it just does.

These spoons that I saw in multiple colors and hand drawn pictures,…some Japanese, some resembling Rorschach paintings, some three dimentional, what ever they were- I was hooked the minute I saw them!

When you shop, which I HATE to do in the first place, and you see something that spikes your interest, it makes it even MORE special! These creations of art were, to me, worth the shopping spree!  I was GLAD I came out of the house and found him!  I’m not meaning  to compare him with falling upon a ‘clothes steamer’ that ‘works like magic’… that would NOT have done it for me.  His Spoons…DID!

I asked the ‘booth lady,’ “who does these??”  She told me, “he’s a very sick man, that  needs tubes to breath from, but he has asked me to sell these spoons on consignment, and because they’re so precious, and he’s sick, I do it!” 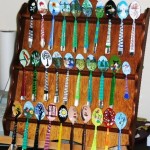 I bought 10 spoons.  They are teaspoons,   decorated with his painting,  with a little hook on the back, or a magnet, and can be hung up on your refrigerator, or a wall, but wherever you hang them, they are stunning!  Every week,… I’d go by, and see the new spoons that were available, almost like a ‘Passion.’

I finally asked her, if she could make the arrangements for me to meet him.  I wanted to see what made him ‘tick.’  She took down my number, and told me she’d give it to him.  I never expected to hear from him….but he called!

I told him, I wanted to interview him, see how he does what he does, and just learn more about HIM, and his art.  He agreed and invited me to the house, where he greeted me with 100 feet of tubing starting from his nose, trailing along the floor!  I was so afraid that I’d step on the immediate tubing and yank it out of his nose- but he was unconcerned!  He graciously said to me, “Dont worry about stepping on the tubing, it will still work!”

He and his wife sat me down at the dining room table, and allowed me to ask my questions.  Here is the history of this ‘magic man’ and his family:

His family, including he and his wife, who were a stunning couple, came from Cuba in 1961 after Castrotook over.  He joined his father in NJ, on a Milk Route, which consisted of glass bottles being delivered at night, because at that time there were no such thing as refrigerated trucks!  In fact, the truck his father owned was bought for $50!  He said, at that time there were only Quart size bottles of milk, and after he built up this route, and decided to sell it off, GALLON sized bottles came into existance which wound up destroying the business.  He said, “When I started with my Milk route there were 152 of us that were called ‘sub dealers,’ and when I sold, there were only 4 of us left! I think I got out when the time was Right!”  He had a milk route for 17 years.  ‘ART’, was never a ‘thought.’

He then moved to Dade County, Fla. to became a salesman for “Churchill Coffee.”  Again, no ‘art’ in the forecast, and he stayed for 6 years, until they sold the company.

The natural move from there, was to a company that focused on expresso coffee, called Pilon Expresso, which is now known as ‘Rowland Coffee Roasters.’  He was a service manager there, at that point, married for 19 years, and then retired at the age of 62.  A VERY hard worker, and yet at the age of 62 STILL, no ‘art’ on the horizon…

I guess I should mention they’ve had 2 successful sons, one who’s worked for the phone company for many years, another hard worker– and one who became a psychologist, both of whom a couple should be Proud of!  Grandchildren as well, one who sadly is autistic, but lucky for me, was the reason they moved here to the Charlotte area!

Aurelio and Maria moved here to be with their children, so that they could help raise, and ‘be there’ for this special grandchild.  Wonderful grandparents, helpful parents, and now, retired.

As the story goes… the man who came from ‘milk’ needed more to keep him busy, so he became interested in painting.  He looked at others’ pictures, different styles of art, picked up a paint brush and started painting anything that looked worth painting!

One year after being here in the Charlotte area, he was diagnosed with Pulminary Fibrosis.  This vibrant man, the giving soul, who was full of life, suddenly became handicapped. Tubes were attached to help him breath on a daily basis.

His wife was, and is, his biggest fan, by far.  All ‘art works’ that he has made, she quietly saves, what she calls, the ‘firsts’, because Someday… they may be worth something– and each ‘first’ is filled with memories!

It’s quite a sight to see, especially with the divorce rate being so high,- this couple that has beaten the odds, has not only gone against the grade, they are blissfully in love with each other.  He calls her, “Mama,” and she knows where all his art pieces are hidden without him having to ask- because SHE hid them.  She knows how special He is, for not just his skills, but for his love, and passion, and he knows how special She is, for the appreciation she shows for what she has, in Him.  I don’t think I’ve Ever seen anything like it before… and that was BEFORE they showed me the Spoons…

It is true, they give ‘spooning’ a new meaning.

As he tells this story, … he needed to ‘fill his mind,’ keep himself occupied, never allowed himself to get in touch with his creative side, because he was always busy supporting a family!  Once he let go, and picked up a paint brush, the world tilted.

This is where I come in… I found his spoons at a Flea Market, which is incredible to me, it’s like finding Picasso next door at a garage sale!  How can this BE??  Each spoon tells a story!

Yet when I asked him, “How did you come up with THIS painting?” He’d answer, “I remembered seeing something like it in a magazine, and I captured it in my mind, and recreated it on the spoon.”

Picture me shaking my head at this point…saying, “What???  This is an acquired art- not something you start at age 72?” They both laughed and giggled at my shock, as he stood up, tubes and all, and took me into his work room.

The wall was covered with a wood frame that held multiple bottles of acrylic paint that he could easily pull from.  He had it down to a science!  An entire work station set up! 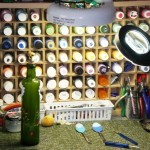 I saw a wooden platform that held 20 spoons, and it answered the question of, “how do you display these if the need arrises?”

Over to the left, I saw a painting of a half finished sunflower.  I asked, “did you mean to not finish it, and leave it that way, or did you just not finish it?”  (He could tell, I really LIKED it!)  His answer was, “I’m not meant for canvas painting, and I tired of it before I finished it.”  I was shocked- because I LOVED it!

His wife then said to me, “You haven’t seen his jewelry yet!”  As if I wasn’t in awe enough, she brought me into the bedroom and opened locked jewelry boxes that held precious items he had made.  Things made out of beads, saftey pins, links, things you’d Never think to use!  I truly didn’t know what to say.  The feeling of when you’re in the presence of a greater power, can be overwhelming. 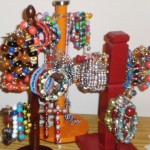 I asked them at that point, “if I were to find you a distributor, would you be interested in selling your wares?”  There was no hesitation. “YES,” was the answer, almost as if, they had been waiting for me to walk through their front door.

As I prepared to leave, I asked if they’d mind if I took pictures to show my husband and kids, which they had no problem with.  In fact when they found out I had 5 kids, they asked, “How many daughters?” I answered 4- and they took me straight back to the bedroom and told me to pick out 4 bracelets that he’d made.

Please remember, I’d never met this couple before that day, and ‘trust’ was immense among us.  I picked out the four I thought they’d love, and thanked them for the time, telling them we’d work on distribution ideas, and that I’d be writing an article on them, as promised.

As I went to the front door, he handed me the Sunflower picture that I had  shown my admiration for, and  said, ” This is for you. Bring your family to my home, and we will continue.”

It’s times like this in our lives, that make us stop and wonder what the REAL big picture is all about.  Simplistic moments of trust, faith, wonderment and admiration.  Isn’t that what we used to call, “having a Hero?”

If you’d like to know how to purchase these works of art, just get in touch with me, and I’ll forward it on .

So, … My Compilation of a Book, Made it to Number ONE?
Next Post: The National Association of Broadcasters -NAB- started out with a BANG! »