Blackbirds Falling DEAD- By The Thousands In Arkansas and Ohio!

You are here: Home / Robin Marshall / Blackbirds Falling DEAD- By The Thousands In Arkansas and Ohio! 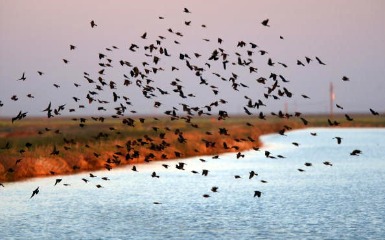 This is No Joke.

Day one, it was reported that within 1 square mile in an area in Arkansas, 1000 Blackbirds fell to their deaths, all at the same time.  Apparently, it didn’t make that much of an impact on scientist, or so they said- their words were that of, “it’s not the first time it’s happened, and it won’t be the last, and all kinds of things can be factored in, such as being hit by lightning, maybe fireworks because it WAS on New Year’s Eve?” PALEEZE! We didn’t just crawl out from under a ROCK!

Next day, in the news, that number of birds jumped up to over 7000 DEAD. What?? That’s ONE BIG BOLT OF LIGHTENING?? Maybe MACY’S Fireworks in Arkansas?  They did autopsies on less than 100 birds, and found no toxins, so believe it or not- they stuck to that story.

NEXT- Same area in Arkansas, 100,000 bottom feeder FISH -DIE in the river that runs through that area.  What could they possibly come up with at this point? The fish lost their ‘snorkels? We’re talking about ONE HUNDRED THOUSAND FISH and SEVEN THOUSAND BIRDS all in the same area!

NEXT- Same thing happened in Cincinnati, thousands of birds fall from the sky.  They’ve once again ruled out ‘foul play,’ but they’ve also determined that these birds were dead before they hit the ground.  They had little ‘heart attacks’ before impact.  This is AWFUL.

I talked about it on the air for the last three days, and received an anonymous phone call from a listener.  He had a LOT to say, and I’d like to pass it on to you.  Remember, I don’t know him, I don’t know if he’s for real, but his quest was to ask ME to ask YOU, if you’ve heard of any of what HE’S so knowledgable about.  He refused to let me put him on the air, but said he’d been listening to me over these last few days, and wanted to explain what he believes is REALLY going on in the midwest.

“Robin, you’ve been talking about these mass killings of birds and fish, and I’d like to offer the explanation to you, that most military people would agree with.  Ask your listeners if they’re familiar with these three items of destruction: 1. Directed Energy Weapons 2. Pulse Guns 3. Rail Guns.  They are designed by the military to be so powerful, imagine a baseball blasting through 12 ft of titanium steel, and they are all Cheaper Forms of Destruction.  The energy from the blast destroys all around it and they’ve been around for 20-30 years.”

It’s a lot to absorb, it makes a whole lot more sense than LIGHTENING, and Fireworks, but it also leaves us feeling very uncertain and uncomfortable, because we WANT to believe that our Military, has the publics best interest at heart as well as the wildlife’s.  They are always in danger of being endangered.

If this Is the case? How dare them.  If it’s Not the case? Let’s find out how all these defenseless animals died within a 3 day period, and FIX it.

Previous Post: « Guess Whats Killing Off Men in Russia?
Next Post: This Is How I Wish The BLACKBIRD STORY Would REALLY Go »