We Lived Through Every Parents Nightmare-And It Made NATIONAL Headlines!

It’s like ‘Murphy’s Law,’ anything that could have gone wrong- DID!

You are here: Home / Robin Marshall / We Lived Through Every Parents Nightmare-And It Made NATIONAL Headlines! 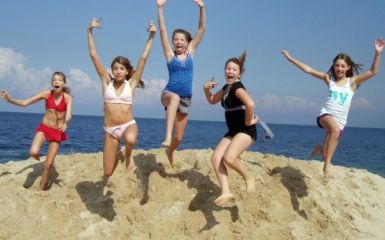 Wait! Let me rephrase this: “Our world was ROCKED- due to Mother Nature’s Little Trick.”

The most ‘hoped and longed for’ desire of my children, was to go home to NY over the winter break for a long week, and spend it with their very much, missed friends.  They’d been crossing the days off of their calendars since the summer!  We bought 3 new suitcases- one for each girl, 13, 14 and 17 years old, they were going off on their own to fly those friendly skies!  Then SHE stepped in. The NERVE of that Beeyotch! Not sure I can say that, but what’s True, is TRUE!  Mother Nature overstepped her boundaries in a Big Way.

We got hit with snow, to the tune of 5 inches the night before lift off!  I started my ‘Mother Dance,’… you know the one, “Girls. We may need to rethink this…,” as I’m looking down into 3 sets of eyes as big as mine looking back at me with horror in them… I continued, “Seriously, I’m not sure this is exactly Safe weather to fly in! How do we know what’s going on in NY??”  SILENCE. That’s what I heard.  Not ONE PEEP.  They were utterly mortified that I’d even suggest the thought of not going!

I checked with US AIR, and the flight was still on, and NY was accepting planes, so… my husband and I looked at each other, shrugged our shoulders, and gave in.  Let the nightmare begin…

The kids got on the plane, and SAT there for 3 hours on the tarmac.  The pilot assured the cabin that they were now ready for takeoff, which they indeed Did do, and flew to NYC.  Their friend’s Mom was already at the airport in NY waiting for the arrival of the plane, because she’d heard the weather was going to be bad later, and thought she’d beat the storm.

I got a call from my 17-year-old, which for the life of me I couldn’t figure out HOW– she was still in the air- but the captain was flying low and had just blurted out over the speaker system, that they couldn’t land in NY!  The Panic started to seep in, about now, starting from my head, traveling south as I started stomping my feet in my, “I TOLD  YOU!” dance!  It turned into a RAIN dance by the time we hung up, as I overheard the pilot saying, “Ladies and Gentlemen, due to the severity of the storm we’re flying below, (Below? What BELOW?) we’ll need to park this plane in Pennsylvania.”  That’s when we lost the connection. I should start a blog called, “R U KIDDING me.”

Pennsylvania’s a pretty big state, and being that I had no idea which was the designated CITY- I started calling everyone and anyone I knew in each city I could think of.  All cities were covered, and I was proud! EXCEPT for Harrisburg, and that’s where they landed!

Next, I receive a call from the eldest, and they’re off the plane, sitting in the airport, in Harrisburg, mind you this is 6 hours already- and she says, “Mom? They’re putting us on a bus to La Guardia, and it’s leaving soon.”  ‘Out of control?’ YES, at that point, I BLEW.  I put my lips as close to that phone as I could, almost swallowing it, and said, “GET ME AN ADULT that WORKS for US AIR! NOW!!!”  This guy gets on the phone and tells me, they either get on the bus, or fly back to Charlotte.  No, “Ma’am, would it be ok with you, if we put your 3 children on a bus, in this monstrous blizzard instead of flying them in this monstrous blizzard all the way back to Charlotte?” He just out-and-out Told me what they were doing with MY KIDS.  Furious and frustrated, doesn’t EVEN come close to how I was feeling.

I had to weigh the odds- that was some storm… in which scenario, did we see them with a greater chance of survival?  We wound up not having to make the choice, because the next thing that happened was, NO BUS.  It couldn’t make it to the airport.  At that point, I put the back of car seat down… did I forget to mention that this whole conversation was on my cell, while I was out with my other two kids?  The two older kids, whose mouths were pretty much agape at this whole shenanigan.  My 22-year-old did the worst thing she could have done: She said, “I TOLD YOU not to let them go, now you SEE??”  She’s lucky I gave birth to her.

They put my three babies back on a plane, and flew them through that storm right back to Charlotte. The clock ticked… I kept looking up at the sky… and they made it.  My husband waited for 2 hours at the US Airways refund desk, where he was told, ‘Sorry- no dice.’   Again- lucky it wasn’t ME in that line. I have the shorter fuse, for sure.

Here they came, into the house, 12 hours later, my three seasoned travelers, with their heads hung low.  I never felt so badly for anyone ever before.  They walked upstairs, and picked up their crossed off calendar, and just looked at it.

Next day, I checked every airline available, and there were no flights to NY.  I also arranged to get that refund! Paleeze… then?  I booked the BUS.

Hope your holiday was a bit more calm than ours!

Previous Post: « Im About To Paint A Picture For You All-Visually.
Next Post: PART TWO- of the Worst Nightmare TRIP goes NATIONAL! »